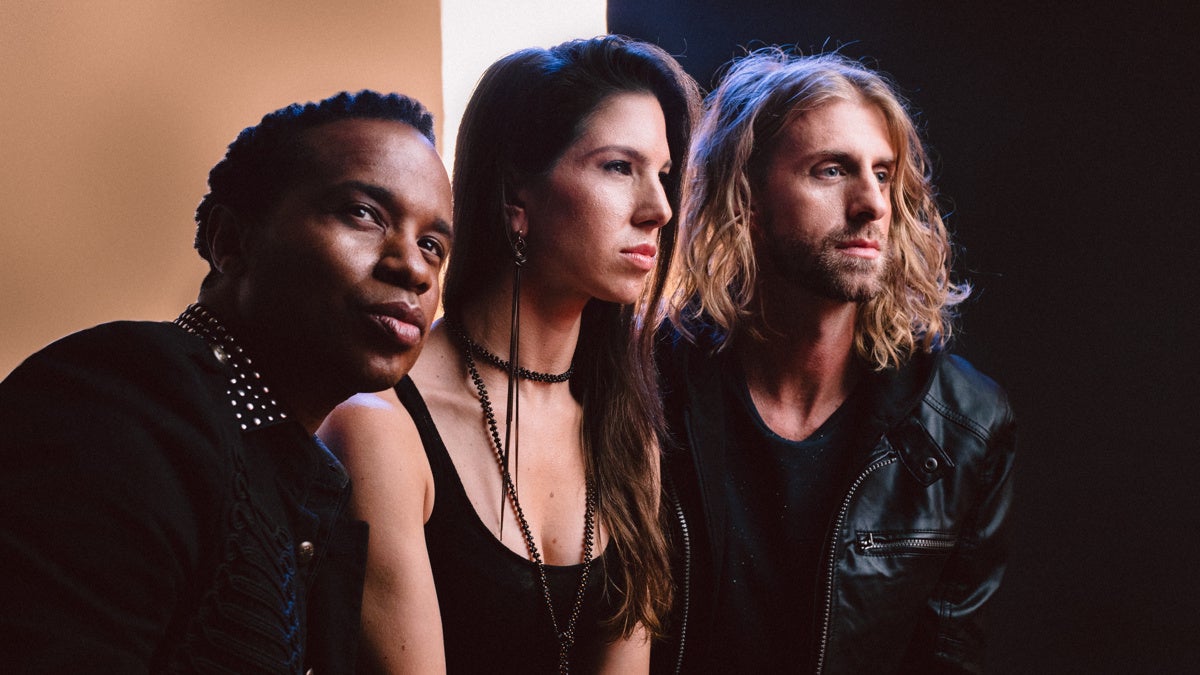 Everything’s alright, yes, everything’s fine! Almost 10 years after the last major tour and 50 years after it was first performed, a new production of Andrew Lloyd Webber and Tim Rice’s Jesus Christ Superstar is touring North America. Directed by Timothy Sheader and featuring choreography by Drew McOnie, this Regent’s Park Open Air Theatre production won the 2017 Olivier Award for Best Musical Revival, and the tour, which launched October 1 at Syracuse’s Landmark Theatre, is scheduled to play over 30 cities by next fall.

Leading the new Superstar tour are three sublime talents: Aaron LaVigne (Spider-Man: Turn Off the Dark, Rent) as Jesus Christ, Jenna Rubaii (Groundhog Day, American Idiot) as Mary Magdalene and James Delisco Beeks (Kinky Boots, Aida) as Judas Iscariot. The three performers are thrilled to be taking the musical, which dramatizes the last week of Jesus’ life, across the U.S. and Canada. For this new interpretation, the show is meant to feel like a rock concert and that atmosphere is on full display throughout, especially when Jesus (LaVigne) performs “Gethesemane” at a mic stand while playing the guitar.

Get to know a little bit more about LaVigne, Rubaii and Beeks by gazing at Emilio Madrid’s transcendent portraits of the three stars and finding out what they admire most about Lloyd Webber and Rice’s score, how they view the iconic characters they’re tasked with bringing to life and why they hope audiences will have heavenly reactions to this new interpretation of Jesus Christ Superstar.

What’s your favorite song from the score and why?
“Gethsemane.” It has come to a boiling point. There’s no turning back, but Jesus is scared out of his mind to follow through with the plan. It’s a roller coaster of emotions. The same with “Judas’ Death!”

What did Andrew Lloyd Webber and his music mean to you growing up?
I was 18 years old when I heard Superstar for the first time, and I ended up playing Judas in the show in my high school. It set me down a path that would lead me to a career in the arts and eventually the 50th anniversary tour as Jesus. Amazing!

How do you view Jesus, personally, and how does that factor into your portrayal?
Christ, the man, sounded like one heck of a human. Giving. Loving. Charismatic. Forgiving. Healing. These are traits we can all aspire to.

What do you most want the audience to “get” out of your portrayal of the role?
Seeing Christ as nothing more than a man, a friend, a person confused and vulnerable, yet sharply focused on fulfilling his ultimate destiny, as tragic as it was.

What’s something about this production of Superstar that you think audiences will be surprised by?
The care and respect with which this production portrays this text and music. The Brown Album will be fully alive!

What’s your favorite lyric from a Superstar song?
“You have nothing in your hands. Any power you have comes to you from far beyond. Everything is fixed and you can’t change it.” (“Trial Before Pilate”)

What do you admire most about Andrew Lloyd Webber and Tim Rice’s music for Superstar?
The risk! The album has such a unique soundscape because of the variety of genres they explore. They also have this incredible way of blending simplicity with complexity, which makes the score so enticing!

How do you view Mary, personally, and how does that factor into your portrayal?
I see Mary as an individual who was truly devoted to understanding her self within the process of understanding Jesus and what he was teaching. I see her as the feminine counterpart to him, which, I believe, allows me to explore her with more depth and curiosity. I’d like for audiences to see this woman as more than the female among men who has been painted with so many different colors over the centuries.

What’s your favorite song from the score and why?
“Pilate’s Dream.” I love the folky, simplistic nature of it. It’s so representative of that singer-songwriter quality of the time it was written.

What did Andrew Lloyd Webber and his music mean to you growing up?
His music was the reason I was drawn to musical theater. At the age of six, I had the opportunity to perform in the children’s chorus of Joseph and the Amazing Technicolor Dreamcoat when the touring company came through my hometown theater in Tampa, Florida. I’ll never forget learning the list of colors and sitting on that stage for the entire show, watching those performers right in front of me. It was mesmerizing. It really feels like life has come full circle knowing that I get to sing another Lloyd Webber score, on the stage where I grew up watching so many tours, imagining that would be me up there one day…a dream come true!

What do you most want the audience to “get” out of your portrayal of Judas?
Judas is one of the most misunderstood and demonized characters in modern history. I want audiences to understand that Judas had to do what he was destined to do as is revealed in the recent discovery of the gospel of Judas. He has a nuanced story to tell as his sacrifice was just as great or even greater than Christ’s sacrifice; as he was damned for all time as opposed to being praised through time. If you think about it, without Judas the whole plan of salvation that Judeo Christians cherish would not have been achieved without Judas’ actions, which he was instructed to do by Christ himself. Food for thought.

What do you admire most about Andrew Lloyd Webber and Tim Rice’s music for Superstar?
The music is timeless, powerful and amazingly appropriate for the story being told. The recurring themes are brilliant and leave audience members humming them for days, months, or even years after hearing them. It is a testament to the greatness of the music since it is still one of the most popular musicals after almost 50 years.

What’s your favorite song from the score and why?
My favorite song is “Heaven on Their Minds,” but I am a bit biased as I get to sing this song every night. The guitar riff that starts it off and drives throughout the song is one of the best riffs in music to date. The message of the lyrics from Judas’ perspective gives us insight into a character that has been written off in history and gives him a voice that should be heard.

It’s been 10 years since the last major tour of this show, why do you think it’s important for Superstar to be touring America in 2020?
The timeless story told through Judas’ eyes needs to be heard and truly analyzed. The iconic music behind it will never get old and 50 years from now I am sure it will be celebrated with newer, younger talents. This particular production is so revolutionary that it should be seen by the masses worldwide. With the political climate as it stands today, Superstar reveals that corruption in institutions is nothing new and maybe it’s just human error. Art imitates life, they say, and maybe we humans need to see and know ourselves in order to correct ourselves to make a better world.

What’s your favorite lyric from a Superstar song?
“My mind is clearer now.” (“Heaven on Their Minds”) What a way to open a narrative! I love this show. Come see us.

Visit BroadwayAcrossAmerica.com to find out when the Jesus Christ Superstar tour is headed to your city.