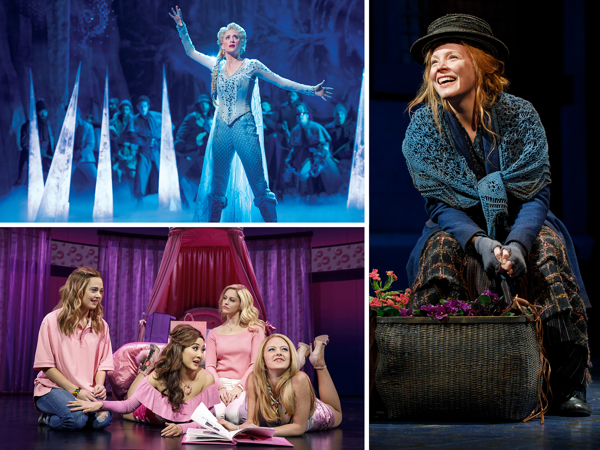 The biggest hits on the Great White Way are headed to Minneapolis as part of the just-announced Bank of America Broadway on Hennepin 2019-2020 season!

Broadway blockbusters Disney’s Frozen, My Fair Lady and Mean Girls will be part of the upcoming season. The series will also include Anastasia, The Band’s Visit, Come From Away, Jesus Christ Superstar, Summer: The Donna Summer Musical, The Phantom of the Opera, RENT and Blue Man Group.

Learn more about all of these exciting stage hits below!

RENT
August 14 – 18
Season Option
In 1996, an original rock musical by a little-known composer opened on Broadway…and forever changed the landscape of American theatre. Two decades later, Jonathan Larson’s RENT continues to speak loudly and defiantly to audiences across generations and all over the world. And now, this Pulitzer Prize- and Tony Award-winning masterpiece returns to the stage in a vibrant 20th anniversary touring production. A re-imagining of Puccini’s La Bohème, RENT follows an unforgettable year in the lives of seven artists struggling to follow their dreams without selling out. With its inspiring message of joy and hope in the face of fear, this timeless celebration of friendship and creativity reminds us to measure our lives with the only thing that truly matters—love.

MEAN GIRLS
October 1 – 13
Direct from Broadway, Mean Girls is the hilarious hit musical from an award-winning creative team, including book writer Tina Fey (30 Rock), composer Jeff Richmond (Unbreakable Kimmy Schmidt), lyricist Nell Benjamin (Legally Blonde) and director Casey Nicholaw (The Book of Mormon). Cady Heron may have grown up on an African savanna, but nothing prepared her for the vicious ways of her strange new home: suburban Illinois. Soon, this naive newbie falls prey to a trio of lionized frenemies led by the charming but ruthless Regina George. But when Cady devises a plan to end Regina’s reign, she learns the hard way that you can’t cross a Queen Bee without getting stung. New York Magazine cheers, “Mean Girls delivers with immense energy, a wicked sense of humor and joyful inside-jokery.”

THE PHANTOM OF THE OPERA
November 20 – December 1
Season Option
Cameron Mackintosh’s spectacular new production of Andrew Lloyd Webber’s The Phantom of the Opera returns! Critics are raving that this breathtaking production is “bigger and better than ever before” and features a brilliant new scenic design by Paul Brown, Tony Award-winning original costume design by Maria Björnson, lighting design by Tony Award winner Paule Constable, new choreography by Scott Ambler and new staging by director Laurence Connor. The production, overseen by Matthew Bourne and Cameron Mackintosh, boasts many exciting special effects including the show’s legendary chandelier. The beloved story and thrilling score—with songs like “Music of the Night,” “All I Ask Of You” and “Masquerade”—will be performed by a cast and orchestra of 52, making this Phantom one of the largest productions now on tour.

THE BAND’S VISIT
December 17 – 22
Winner of 10 Tony Awards, including Best Musical! Spend an evening in the company of unforgettable strangers at The Band’s Visit—now one of the most celebrated musicals ever. It rejoices in the way music brings us to life, brings us to laughter, brings us to tears, and ultimately, brings us together. In an Israeli desert town where every day feels the same, something different is suddenly in the air. Dina, the local café owner, had long resigned her desires for romance to daydreaming about exotic films and music from her youth. When a band of Egyptian musicians shows up lost at her café, she and her fellow locals take them in for the night. Under the spell of the night sky, their lives intertwine in unexpected ways, and this once sleepy town begins to wake up. The Band’s Visit features music and lyrics by Tony Award and Drama Desk Award winner David Yazbek, and a book by Tony Award winner Itamar Moses. It is based on the screenplay by Eran Kolirin, and is directed by Tony Award winner David Cromer.

JESUS CHRIST SUPERSTAR
January 21 – 26, 2020
Jesus Christ Superstar is an iconic musical phenomenon with a world-wide fan base. In celebration of its 50th anniversary, a new mesmerizing production comes to North America. Originally staged by London’s Regent’s Park Open Air Theatre and helmed by the acclaimed director Timothy Sheader (Crazy for You, Into the Woods)and award-winning choreographer Drew McOnie (King Kong, Strictly Ballroom), this production won the 2017 Olivier Award for Best Musical Revival, garnering unprecedented reviews and accolades. Appealing to both theater audiences and concert music fans, this production pays tribute to the historic 1971 Billboard Album of the Year while creating a modern, theatrical world that is uniquely fresh and inspiring. With music and lyrics by Emmy, Grammy, Oscar and Tony Award winners Andrew Lloyd Webber and Tim Rice, Jesus Christ Superstar is set against the backdrop of an extraordinary series of events during the final weeks in the life of Jesus Christ as seen through the eyes of Judas. Reflecting the rock roots that defined a generation, the legendary score includes “I Don’t Know How to Love Him,” “Gethsemane” and “Superstar.”

BLUE MAN GROUP
February 4 – 9, 2020
Season Option
At Blue Man Group, you’ll rock, laugh and party. As three bald and blue men explore our world, together we’ll discover music, comedy and surprises at every turn. By the end of this spectacular journey, you’ll be saying “I don’t even know what just happened but I loooved it.” Thirty-five million people of all ages and cultures know what Blue Man Group is really about. Now it’s your turn!

MY FAIR LADY
March 3 – 8, 2020
From the Lincoln Center Theater that brought you The King and I and South Pacific, comes “a sumptuous new production of the most perfect musical of all time” (Entertainment Weekly), Lerner & Loewe’s My Fair Lady. Director Bartlett Sher’s glowing production is “thrilling, glorious and better than it ever was” (The New York Times). “Every so often a revival comes along that reminds you how indispensable great theater can be” (NY1). Boasting such classic songs as “I Could Have Danced All Night,” “The Rain in Spain,” “Wouldn’t It Be Loverly” and “On the Street Where You Live,” My Fair Lady tells the story of Eliza Doolittle, a young Cockney flower seller, and Henry Higgins, a linguistics professor who is determined to transform her into his idea of a “proper lady.” But who is really being transformed?

ANASTASIA
March 24 – April 5, 2020
From the Tony Award-winning creators of the Broadway classic Ragtime and inspired by the beloved films, Anastasia is the new Broadway musical that’s “one of the most gorgeous shows in years” (The New York Observer). This dazzling show transports us from the twilight of the Russian empire to the euphoria of Paris in the 1920s, as a brave young woman sets out to discover the mystery of her past. Pursued by a ruthless Soviet officer determined to silence her, Anya enlists the aid of a dashing conman and a lovable ex-aristocrat. Together, they embark on an epic adventure to help her find home, love and family.

FROZEN
May 13 – 31, 2020
A mysterious secret. A family torn apart. As one sister struggles with being an outsider and harnessing her powers within, the other sets out on a thrilling adventure to bring her family together once again. Both are searching for love, but they’ll learn that to find it they’ll have to look inside themselves first. Disney’s Frozen is melting hearts on Broadway in an all-new production created for the stage by an award-winning team. It features the songs you know and love from the original film, plus an expanded score with a dozen new numbers. The creative team at its helm has a cumulative 16 Tony Awards to its credit, including the EGOT-winning composer Robert Lopez, Oscar-winning lyricist Kristen Anderson-Lopez, Oscar-winning writer Jennifer Lee and Tony-winning director Michael Grandage. An unforgettable theatrical experience filled with sensational special effects, stunning sets and costumes, and powerhouse performances, Frozen is everything you want in a musical: It’s moving. It’s spectacular. And above all, it’s pure Broadway joy.

SUMMER: THE DONNA SUMMER MUSICAL
July 14 – 19, 2020
She was a girl from Boston with a voice from heaven, who shot through the stars from gospel choir to dance floor diva. But what the world didn’t know was how Donna Summer risked it all to break through barriers—becoming the icon of an era and the inspiration for every music diva who followed. With a score featuring more than 20 of Summer’s classic hits, including “Love to Love You Baby,” “Bad Girls” and “Hot Stuff,” the electric experience of Summer: The Donna Summer Musical is a moving tribute to the voice of a generation. Vogue calls it, “The new must-see Broadway musical of the moment. Don’t miss it! A vibrant and sparkling homage to the queen of disco. It’s the perfect place to dance to your favorite disco hits by the diva!”

COME FROM AWAY
August 11 – 16, 2020
The true story of the small town that welcomed the world. Broadway’s Come From Away has won Best Musical all across North America! The New York Times Critics’ Pick takes you into the heart of the remarkable true story of 7,000 stranded passengers and the small town in Newfoundland that welcomed them. Cultures clashed and nerves ran high, but uneasiness turned into trust, music soared into the night, and gratitude grew into enduring friendships. Don’t miss this breathtaking new musical written by Tony Award nominees Irene Sankoff and David Hein, and helmed by Tony Award-winning Best Director, Christopher Ashley. Newsweek cheers, “It takes you to a place you never want to leave!” On 9/11, the world stopped. On 9/12, their stories moved us all.

For more information about the series and the benefits of being a subscriber, click here.

More Buzz About My Fair Lady